Rabbit shuffles his way out of bed in the morning, rubbing his red eyes, bleary, bitter. He sighs a deep sigh as he drags his feet into the bathroom.

Mondaaaayy…..he groans, as he wipes his face with his manky blue washcloth. He flings the washcloth down on the side of the sink where it slips off and falls to the ground. He slinks into the kitchen, his shoulders hunched as if Sisyphus had rested his rock across them.

He breaks two eggs over a frying pan, spilling the whites over the stove, not bothering to wipe up the mess. He eats his eggs while watching the news, not really paying much attention, since it’s always the same. He puts on his dull gray suit and squeezes out his door, off to another day at work.

Rabbit has the Monday Blues.

Rabbit wasn’t always this way. Once upon a time, he was the one you’d find in the middle of the dance floor at least a few nights a week, dancing as if his life depended on it.

He’d do the running man, the cabbage patch, and, of course, the bunny hop. He did the cha cha, the charleston, the rhumba and the salsa. He would boogie woogie, electric slide, do the dougie, and bogle. He danced anywhere and everywhere there was music, and even some places where there wasn’t – he’d hum a little tune in his head and dance along.

But “Dancing will get you nowhere,” his old father had said. “Do something that will make you some money!”

Numbers were linear and balance sheets could be balanced and every month you’d get your paycheque and pay your bills and do some fun stuff sometimes but most of the time just sit at your desk and account.

And Rabbit danced less and less and sat more and more until he could hardly remember how much he used to shake a leg. On Fridays he was too tired to go out and dance so he just went home and watched a movie and slept. And Saturdays he had to do laundry and go grocery shopping and clean the house and do all the errands he couldn’t get done because he was too busy sitting (and accounting) Monday to Friday.

There was Salsa Sundays at the Culture House on Breek Street but then he was too busy preparing for work the next day and besides, he wouldn’t wake up in time for all the sitting and accounting on Monday if he was out too late having fun the night before.

When he watched Dancing with the Otters or So you think Snakes can Dance and thought to himself ‘I can do that!’ he’d quiet that thought (usually with a carrot cake) because he was way too old to start a dance career and how would he pay rent for his lovely hutch or buy his fancy Whole Foods hay if he left the sitting and accounting?

Maybe it was just best to continue with the way things were. 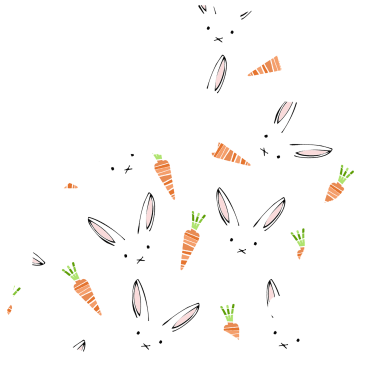 Then one day, Rabbit was dragging himself home from his job when he saw some young bunnies in the park. They had a big boom box and were practicing their dance moves.

They were doing the Nae Nae, the Whip, and the Harlem Shake. They did the Cat Daddy, the Shmoney, and the Dab. They cranked it like Soulja Boy, did the Stanky Legg and Walked It Out.

He raised the roof, river danced, and moonwalked across the grass. He MC Hammered his way back, did that dip we dip you dip, and the Humpty dance. He tootsie rolled, did the roger rabbit (naturally) and vogued.

At first the bunnies looked at him like they had found a slug in their lettuce, but when they saw that he was killing it with his old school dance moves, they got back into the groove.

Rabbit and the bunnies freestyled all afternoon and they asked him to come back same time, same place next week. They were practicing for A Big Dance Show at the community center and they thought Rabbit’s old school style mixed with their contemporary moves would certainly bring the house down.

Rabbit bounced off with a pep in his step for the first time in a long time.

He still had to sit and account every day, but his mind was alive with all the dances he planned to teach the bunnies. He went back to the park every week and schooled them on everything he knew.

He taught them the Sprinkler, the Kid n’ Play, and the Bump and Hustle. He did the Samba, the Foxtrot, and the Locomotion. They learned the Twist, the Shimmy and the Mashed Potato.

On the day of the Big Dance, Rabbit bounced nervously in the front row as his bunnies took to the stage. Almost as soon as the music began, the audience jumped to their feet with wild applause and started to dance along.

And when the bunnies got a standing ovation at the end of their routine, they brought Rabbit up on stage and everyone clapped even louder! His heart was bursting with pride and joy and that feeling you get when you do something you love and people love it — thumpathumpthumpaTHUMP!

On Monday, Rabbit jumps out of bed, rubbing his red eyes, ready to start the day. “Monday!” he says with glee as he splashes his face with water and hops his way into the kitchen. He gulps his breakfast smoothie down as he reviews his plan for the day.

Today he’s teaching a tap dancing class for giraffes, ballroom dancing for hippos and breakdancing (all species). He puts on his orange headband, his green dancing tights and his pink running shoes and bounces out the door to his job as Director of Dance for the Georgetown Community Center.

Rabbit has danced his Monday Blues away.

One thought on “Rabbit dances the Monday Blues”