This story was an exercise in my writing course to write about the five senses. 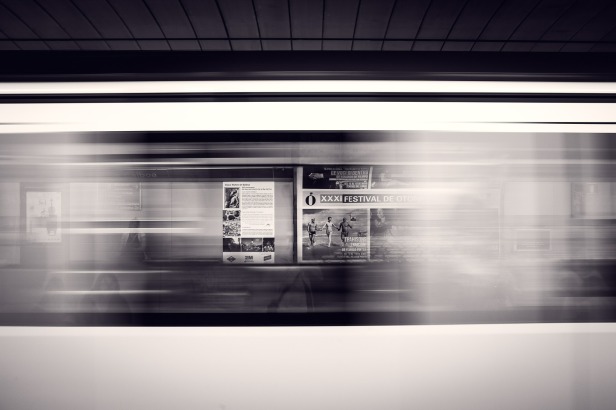 The train stank of sweat and disappointment. Twenty minutes stuck underground in the middle of a bright August evening was testing the limits of Lyla’s senses. A man who had clearly never heard of a bar of soap hovered his armpit just at the level of her nose. His acrid, vinegary smell made her eyes water. But they were packed like sardines in the evening rush hour and she couldn’t bend her neck backwards far enough to escape his gangrenous bouquet.

She distracted herself from the smell and the wait by picking out which passengers should be sacrificed for food in the event they were stuck in here forever. Food should have been the last thing on her mind, given her current situation, but it helped pass the time as she waited for the train to start moving again.

The hot guy three seats over was her first choice. He was tall, with dark, thick wavy hair and a sexy 5 o’clock shadow. He looked a bit dangerous, in that way some guys do, like a fire you want to put your hand in even though you know it would burn. It would be a shame to have to eat him, thought Lyla, but then he looked like he would taste So Good. His skin was so golden she could practically taste the honey in her mouth. His flesh would be mouth-wateringly tangy, with a slightly smoky flavor like a steak perfectly barbecued on an open grill in the park in summer. Now she was actually getting hungry. And also very clearly salivating over Hot Honey Barbecue guy.

Lyla turned her head the other way before Barbecue could catch her staring at him like he was a cartoon pork chop. Hmm. Who else could she eat. There was a very thin man with glasses staring furiously into the middle distance, as pissed off as the rest of the passengers about the delay. His skin was gray and sallow and an expression of bitterness was etched deeply into his face. Bitter, thought Lyla, is exactly how he would taste. Nothing to eat there.

Further along was a very attractive, very tasty-looking family of four. They looked sporty, with ruddy cheeks and laughing eyes, their hair like spun sugar around their heads. The parents were keeping the young kids entertained throughout the dreary wait, and they all seemed to be in a pretty good mood, given the circumstances. They made her think of strawberries – fresh and light and slightly tangy, with just a hint of that sugar on top.

She continued to scan the train car, her eyes eventually coming to rest on a chubby woman sitting diagonally across from her. She was wearing an absurd pair of yellow-feathered pants and a fuchsia tank top about two sizes too small. Her heaving bosom looked like two prisoners desperately trying to flee confinement. They made Lyla think of dumplings. Those big fluffy Chinese dumplings with the roast pork in the middle. That would be a tasty last meal before we all perish to death in this godforsaken subway, she thought.

The three-note song signaling an impending announcement broke through Lyla’s cannibalistic fantasies. The tinny voice of the conductor dribbled through the speakers like a weak flow of water through a rusty faucet. She squinted and cocked her head to the side, the better to hear today’s excuse for getting her home late, hungry, tired and disgruntled. A series of mumbles washed uselessly over the passengers’ heads. “What did he say?” asked an agitated businesswoman whose helmet-shaped coif was beginning to wilt under the pressure of the humidity. Nobody knew. It didn’t matter, because the train still didn’t move.

And then, just when the situation couldn’t get any worse, it did. The odorous man Lyla had been steadfastly trying to avoid adjusted his stance and, in the process, rubbed his armpit sweat on her face. The slimy touch against her cheek made Lyla’s skin feel like it was trying to peel itself off itself. Like when animals gnaw their legs off to escape from danger. She wanted to scream, or gag, or throw up a little in her mouth. For a woman who had an almost clinical fear of germs, having moldy sweat wiped on her face was a horror she couldn’t quite describe. Instead she choked the scream down and wiped her face with the sleeve of her sweater, the spot burning like acid through her cheek.

After that assault, she couldn’t resume picking off people to virtually kill and eat. In fact, she thought she might never eat again. Instead she turned her head to the left and tried to think happy, fresh smelling thoughts, balancing herself on her heels as far back as possible in order to avoid another swipe of Armpit sludge, breathing shallowly between her half open mouth.

Suddenly, the lights in the train car turned blinding white, causing the passengers to gasp and cover their eyes. This is it, Lyla thought. Death has come to release me; I must walk into the light. But it was just the train’s electrical system rebooting itself. The lights returned to normal, and the train started up and moved on its way.

3 thoughts on “The Train”